Umpires Decision in Game of Cricket

If an Umpire makes a mistake in giving a Batsman out then what happens ?

Australia vs Sri lanka second test match, last day, 507 runs was the target given by the Australia to Srilanka .

Sri lanka was chasing the target very well with Kumara sangakkara debastating the Australian pace attack but was wrongly given out on brilliant 192 by the umpire Rudy koertzen.

The decision has disappointed the batsman but he couldn’t do nothing once the decision is given by the umpire.

Later on umpire Rudy koertzen had apologized the batsman which is good to see.

But if at all the umpires think that they have done a mistake in giving the batsman out interestingly they can take back their decision by giving them not out . And they have right to do it. 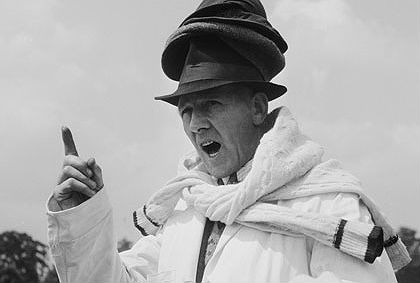 Generally umpires take back their decisions in declaring boundaries and sixers. Firstly they declare the ball for boundary and then takes back their decision after getting confirmation from TV replays or third umpires and then declares them as a sixer or any thing else.

At the end of the day if at all the umpires think that they have done a mistake in giving the batsman out, they can take back their decision but before the batsman crosses the boundary line.

WHAT ABOUT THE FIELDING CAPTAIN

There is no law or rule for the umpire to take the permission from the fielding side or fielding captain from calling the batsman back to the crease.

If at all the fielding side captain argues with the decision given by the umpire, at the end of the day it is the umpire who gives or declares the final judgement.

In DLF cup in 2006 India vs Australia , Sachin Tendulkar was wrongly given out by the umpire.

After that the umpire has changed his mind and took back his decision and called Sachin Tendulkar back to the crease by giving him not out.

The fielding side captain Ricky Ponting was un happy with the decision but he couldn’t do nothing , at the end of the day it is the umpire who finalises the decision.