Hit wicket and Rules in Cricket

The batsman hits a ball for a six, and then loses his balance, fells on stumps. Is it a six or out or both six and out?

Yes its out, it’s a Hit-Wicket. In modern day of cricket there is a rule that is for a single ball there cant be two actions. Now it simply implies the batsman is out and therefore the six that was hit by the batsman will not be counted.

Technically the ball will be treated as dead immediately after once the batsman gets out. There fore at this time there will not be any further action of cricket rule to be considered. 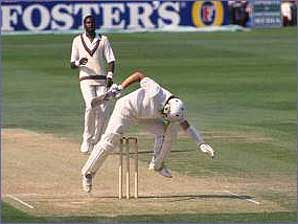 But before 2002 the rules were slightly different, according to that rule what ever the action of cricket takes place first, it would have been considered. Like if a ball hit by the batsman goes for a six or out of the boundary or rope before he fells on the wickets, then simply the “action of hitting a six” which happened first would be considered. It simply indicates the batsman is “Not Out”.

Similarly if a batsman hits the wickets before the ball goes for a six or out of the boundary or rope that was hit by him, then simply the action of “hitting the wickets by the batsman” Which happened first will be countable and considered. It simply implies the batsman gets “hit wicket ” out.